“Leadership is not about a title or a designation. It’s about impact, influence and inspiration. Impact involves getting results, influence is about spreading the passion you have for your work, and you have to inspire team-mates and customers.” – Robin S. Sharma

I need a title!

It makes me look better.

Does it or will it make you lead better?

I don’t know, but it makes me look better! 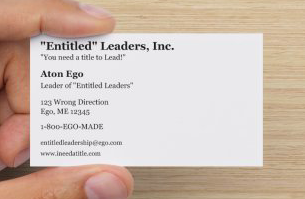 Let’s start with this fact… and it is a fact: A title does not make you a leader. But oh, how many people live in that fictitious world.

So… Some thoughts about leaders being “entitled”…

Titles are like business cards. Anyone can get one… Make one up and hit print.

Leadership is a melting pot of complex, different attributes. A good leader will rally those around for the good of the group and have their support. But… a true leader will be able to step in when difficult situations occur and make the hard decisions. Given almost any situation, a leader will emerge from within a group. Natural leadership ability will always rise.  The need to self-appoint will not be necessary.

It would be great if titles meant effective leadership ability. But that is not the case. Many leaders with titles cannot or chose not to lead. Either case, sooner or later, failure will happen. When it does, the lack of leadership will show.

Leaders who are “entitled” are blind and have limits to their leadership. Their ego and self-centeredness become known for what they are. “Entitled” leaders take credit for others work, give orders for something they do not want to do, or place blame on others for their own mistakes and failures.

But why are these people in positions to lead? Who knows… the problem is that they are there. It does not take us long to figure out that “entitled” leaders surround us every day. What is worse, they have the power to make decisions that affect a lot of different areas.

But where does a title come in? It doesn’t. Please quit thinking it does.

Some of the best leaders we know do one thing well, they lead. Leadership is a verb, not a noun. It is action. It is the form of doing. Those who lead by title only do so because they have a title.

Anyone and everyone has the capability to be a leader. But leadership is not for everyone and that’s OK. A person chooses leadership when they make a decision for the greater good of a cause and stand for it. They lead by example. They do not ask others to do something they are not willing to do themselves.

.…And most of all, leaders act like leaders even when they do not have a title.

Subscribe via email to my blog at the top of the page.